I recently purchased a new camera for my motorbike. What made the Sony HDR-AS30V stick out, beside all the regular stuff such as full HD on 60 fps, remote control via Android and IOS-devices was that it has a GPS device that stores all data and allows you to overlay this information on the final rendered video. I tried doing this collecting data from a GPS device with decent results, but figured a all in one solution was a better deal in the end.

I added a 32 gb micro-SD to be able to record hours of driving but soon noticed some very annoying limitations with the camera. The first one being the internal microphone which picked up more wind than motor noise. The camera has an external microphone-jack, but with the water-proof casing on (which by the way is the ONLY way to mount this camera anywhere), the microphone connector was hidden under the casing, and it’s locking mechanism.

The second thing that really annoyed me was that the camera could not be charged while recording, as the camera went in to a USB-mode which disables the recording feature. Not only was the connector hidden under the waterproof case, but even when out of the case the USB overrode all internal functionality. Using a USB test-block i built a while back for sniffing the USB-protocol, i disabled the two middle-pins (data+ and data-) hoping that this workaround would allow the camera to ether charge or run off external power, but the camera insisted USB was connected.

I don’t really need a waterproof camera so getting a hole trough the case that could allow the external mic to be connected was not a great concern to me. Worst case scenario i could always bring a roll of duct-tape to cover the holes if i ever wanted to go diving with it. But as the locking mechanism was just above the jacket, i had to substitute this with some form of lock. Not to waste to much time on this, i removed the lock and replaced it with a rubber-band. To see the difference between a external vs. internal microphone i cut this clip together:

Sorting out the power issue:

As for the charging part i figured i would build a tiny lithium-ion charger that could fit somewhere in or on the camera. With a camera that measuring 6.5cm x 4cm x 2cm which is jam packed with electronics already i decided the circuitboard needed to be housed in a tiny space between the camera and the casing, on the front of the camera as this would be the only place it fitted. Using a dremel i removed enough of the plastic casing to make it fit. Only problem was, this was also where the external microphone cable was connected. Looking around the net i stumbled over the MCP73831T charger circuit. The smallest package i could find was the SOT23-5 measuring about 2mm x 1mm. Since it was just 3 euros i figured i get a few. Things this size tends to get lost never to be found again. After building a few prototypes the first one went toast in just a second, while the second one seemed to indicate that things were working. Measuring voltage however gave very weird results i still to this day can not explain so i started looking for another charging circuit. After a little googling around i found the MAX1555 also contained in a SOT23-5 encapsulation, however this demanded less surrounding components and became the semiconductor i decided to go with in the end.

I started learning the PCB (open source software for circuit-board manufacturing) but for some reason all circuits i made and all example circuits i opened was giving me an vague error about not all objects being defined. Since my use-case worked fine with the typical application-setup and i took the chicken-shit way out of this. Learning PCB still remains high on my to-do-list. Like most other things in this world, i was not the first to attempt something similar, and looking around further i found this drawing (credit to Hugo for his great work): 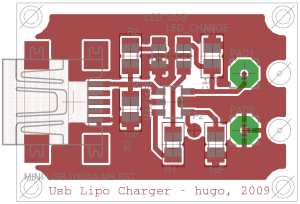 This little bugger might look tiny with a mini-usb covering 1/8th of the board, but fitting it into the Sony HDR-AS30V as was would be like trying to fit a loaf of bread through a key-hole. In lack of better PCB knowledge i loaded it up in Gimp and started removing stuff i didn’t need. I didn’t see any reason to include the USB-power LED, so this could go, and so could the resistor in front of it, all the screw-holes and unnecessary GND copper surrounding the board, resulting in this design: 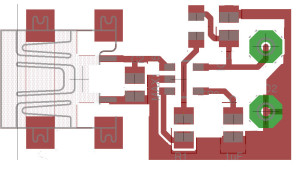 If i would have printed this as is, it would never fit the camera either. It needed a 10mm hole in the middle so the microphone-jack was still reachable, and even my SMB-mounted 1uF capacitors measured 1/3 of the size of the USB connector, and on my tiny board i needed 3 of them. Saying i had a space issue was just the start of it, but i would not let this deter me. The caps had to be inserted into the board to fit. It does not look nice, but it works so don’t start hating on me now :) The tiny 330 Ohm smb-resistor to the left of the board was the next component to be added. 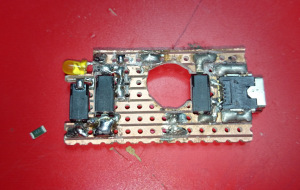 Next component to go on is the tiny MAX1555 SOT25-5. Measuring a tiny 1×2 mm, this component needed to have all 5 legs soldered, a task that took “some” fiddling around before getting it all in place. As this board only has copper on one side, all legs are actually soldered to tiny cables fed through and around the board to connect it with the backside of the board. At this point it was a few hours after midnight and i wanted to finish it up, so not many pictures are taken of the MAX1555, but you can see it pretty okay in this shot taken during the initial charge tests. The battery in was just soldered there for the load-tests, and yes.. This did happen around 03.40am. Sorry about the late night Dremeling, neighbours. 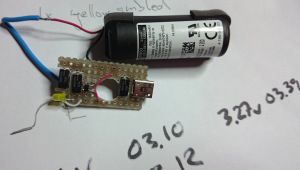 After making sure it all worked, and fitted the waterproof casing i used a 2 component epoxy to add the module to my Sony camera. I also switched the yellow LED to a green one, just for the look of it. 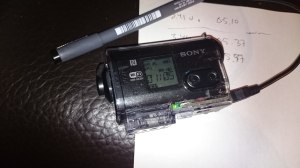 Late this morning i made a test-recording, and for the first time made an 1.5 hour recoding in Full-HD without consuming the battery, making this camera the first Sony HDR-AS30V that can record more than 1 hour. Beside mixing up a batch of polyester that i will submerge the whole circuit-board into to make sure it becomes as rugged as the rest of the camera, not much remains to be done to this projects.

This was a funny hack that only cost a few euro’s but added the features that i did not want to be without. The fact that Sony could have saved me these hours spent by incorporating this feature themselves kind of annoys me. Why Sony allowed the camera to be able to create way longer videos, when there was no way of recording over an hour i guess i will never know. Needless to say this was a good day with another warranty voided. :)